Climate Museum UK is very excited to be a recipient of the first Activist Museum Award, along with the International Slavery Museum and Museum as Muck.

As part of the 20th anniversary celebrations of the Research Centre for Museums and Galleries (RCMG), the School of Museum Studies at the University of Leicester launched the Activist Museum Award in 2019. This award is for an individual or group working in/with museums to support the research and development of an activist project that reflects the ideas presented by Robert Janes and Richard Sandell in their recent book, Museum Activism (2019). Museum activism refers to, ‘museum practice, shaped out of ethically-informed values, that is intended to bring about political, social and environmental change.’

This award will enable us to scope how we might develop a distributed digital collection, encouraging a more commons-based approach to digital museum practices.

Here is a survey aimed at potential contributors – please take a look and share your thoughts if you are interested.

We want to build up the collection through a series of themes. The first theme that we want to work with is Extractivism, providing tools for museums, heritage and campaign groups to surface objects & stories focused on this theme. Our first step is to interpret the concept of Extractivism, through a series of blogposts. This first one sets out the context and core ideas.

As a team in CMUK, we believe that colonialism is an environmental issue, and that the Climate & Ecological Emergency is a systemic justice issue. This can be understood by describing Extractivist Culture, and its opposite, Regenerative Culture. The standard definition of Extractivism is ‘the process of extracting natural resources from the Earth to sell on the world market’. It’s commonly thought of as relating only to mining or drilling, but arguably it applies to everything in this pyramid. 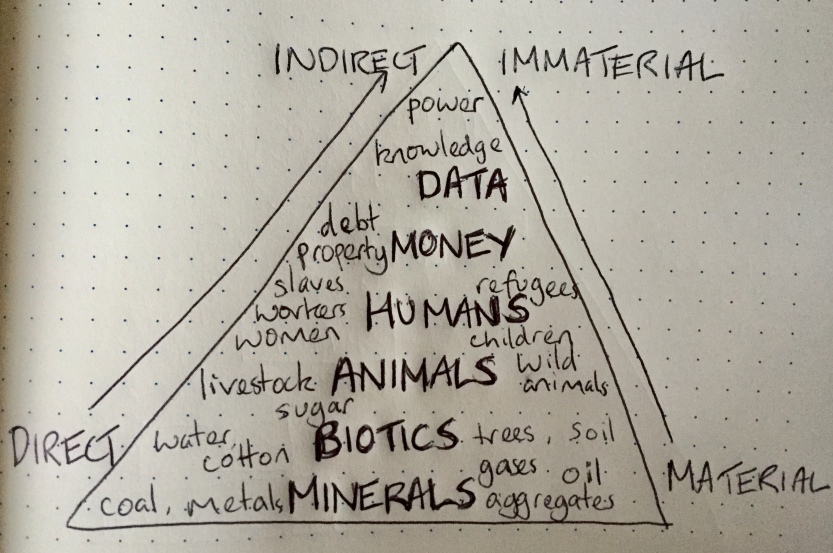 It can also be interpreted as a dominant mindset, or as a way of thinking and living, that colonises, exploits and accumulates, and then fails to replace or regenerate what is taken or harmed. Ecocidal impacts are often invisible or are ‘externalised’.

Extractivism has caused vast damage to wild places and biodiversity over 500 years, and over the past 180 years the extraction of fossil fuels has caused the catastrophic disruption of Earth’s carbon cycle and climate. This all has human costs. Firstly, climate breakdown threatens the lives of billions of people. Direct impacts of extractivism on people have included genocide, displacement and enslavement, and being tied into work that is unsafe and underpaid. Land use changes, such as damming, mining, deforestation and plantations, disrupt or destroy indigenous life-ways and livelihoods in relation to natural environments that they steward.

The kinds of stories, sites or objects that might be surfaced through our project include:

People-centred: the experiences of people whose land, animal & plant kin, and their own bodies and cultures, are treated as resources for exploitation. People may have been displaced through colonialism, urban sprawl and agribusiness, war or ‘natural’ disaster, or may still be defending lands of long-time stewardship. There may be a variety of experiences, such as people in direct front-line struggle today, or people feeling disconnection, loss of memory or the impacts of racism. Interpretations might include re-telling witness events, or piecing together evidence from historic events that have no living survivors. Links could be made to places, materials/objects and animals. These stories might be particularly suited to heritage, community or campaign groups, with knowledge and experiences to share.

Material-centred: exploring the systems of extraction, production, transport and trade around particular commodities and items. Links could be made to places/ecosystems, people and/or animals. These stories might be particularly suited to museums, with collections such as domestic artefacts, industrial technology or agricultural production.

Place-centred: exploring the histories and impacts of extraction through places such as cities, bioregions, ecological reserves or heritage sites. Links could be made to materials/objects, animals or people. These stories might be particularly suited to heritage sites or place-based heritage partnerships.

More-than-human-centred: exploring the extraction of animal and plant kin through hunting, ecosystem destruction, transplantation, breeding and exploitation for transport and labour. Links could be made to places, people or animals. These stories might be particularly suited to zoos, nature conservation trusts, natural history museums, or campaign groups.

Please get in touch on climatemuseumuk@gmail.com if you would like to hear more about this project, or to write a blogpost about an aspect of this theme. (Blogposts will be on this Medium publication.)