This is a version of a more personal blogpost on The Learning Planet. This version focuses on sharing the latest science.

The first is this study showing that the extent of climate change is unparalleled in 2000 years.

And this from Thomas Mote which shows an extraordinary spike in the melting of the Greenland glacier.

The consensus had been that we’ll very likely see a one metre sea level rise within 70 or 80 years, but now scientists from University of Bristol say it is more likely to be well over double that. However, that study was published months before the spike in Greenland glacier melting we can see in the chart above. Greenland is, or was, the world’s second largest ice sheet and it’s affected by the fact that, although Earth overall has seen a 1Cº increase in warming, in the Arctic this is at 4Cº. If this is summer in Greenland now, it will be summer in Antarctica in a few months, and the ice sheets there are more vulnerable to ocean warming.

“The current melt rate is equivalent to what the model projects for 2070, using the most pessimistic model,” says Xavier Fettweis. And the Arctic permafrost is melting 70 years earlier than thought, threatening to release a methane bomb that could more than double the concentration of Green House Gases. And Alaskan glaciers are melting 100 times faster than thought.

70 years early? 100 times faster? These numbers suggest that extremely non-linear impacts are kicking in, as tipping points are passing. Each phenomenon will interact with other systems and unpredictable changes will happen. This is runaway climate change.

Meanwhile, those in power of the USA, Brazil, Russia and elsewhere will carry on denying the Climate & Ecological Emergency and plundering the planet. They will continue to assume that the human story of progress means extracting and destroying nature, and othering the people who defend and care for nature. 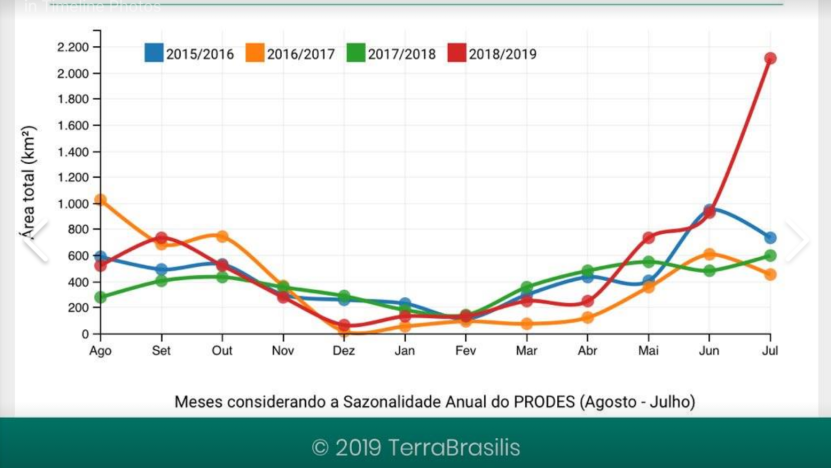 The Economist this week reported on the perilous threat to the Amazon rainforest, which means another major threat to any hope of a stable climate: “South America’s natural wonder may be perilously close to the tipping-point beyond which its gradual transformation into something closer to steppe cannot be stopped or reversed, even if people lay down their axes. Brazil’s president, Jair Bolsonaro, is hastening the process—in the name, he claims, of development. The ecological collapse his policies may precipitate would be felt most acutely within his country’s borders, which encircle 80% of the basin—but would go far beyond them, too.” (And then Bolsanaro sacked the man responsible for tracking deforestation from space.)

While virgin forests are being chopped down, they are also burning. Siberia, Alaska, Greenland and Canada are burning and have been for months. An area of Siberia larger than Belgium is on fire.

This image of a part of Greenland shows the combination of impacts in one place. 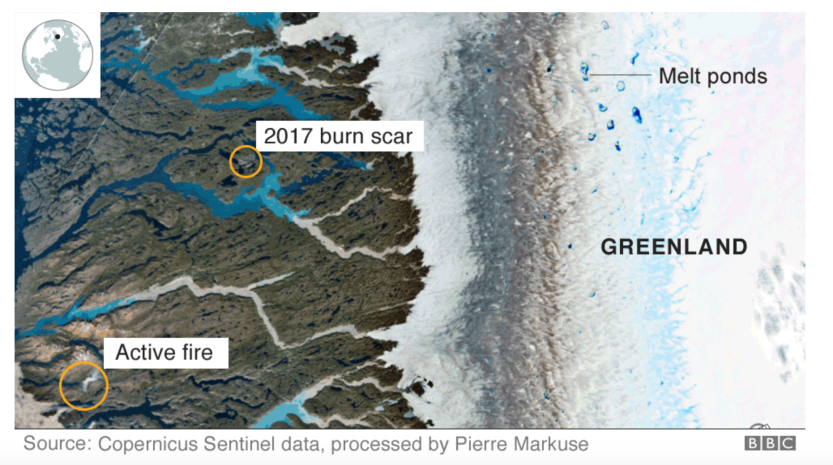 Global emissions, and only those that are being tracked, are enough currently to push temperatures more than three degrees higher. The current temperature rise has been so underestimated that it’s likely there are 40% less carbon reserves that can still be burnt if a 1.5Cº increase is to be averted.

Climate scientist Dr Wolfgang Knorr talking to Jem Bendell says “So the question really splits into two: how likely is it that measures will be taken that could drastically reduce greenhouse gas emissions – by someone; and could these measures come in time to avert a climate catastrophe. The answer to the first is “very unlikely”, given the complete absence of any discernible impact of climate policy on emissions. The answer to the second is: even if the impossible was made possible, the scientific data points to the fact that some catastrophic climate change is inevitable. We have already altered the climate system to a degree that is unprecedented for the last 100s of thousands of years, and the more susceptible parts of the climate system will very likely be affected, with consequences that will be catastrophic.”

It’s hard to do more than report and try to digest. But it does make it impossible to carry on in the same manner of thinking.

Somebody tweeted that it would take a ‘Climate 9-11’ to really change things. But, if this isn’t Climate 9-11, what would be?

We have to generate that change ourselves, through demands and direct action, and through imagining and creating the world we want, and we cannot wait for more disaster. It is simply not acceptable for civic organisations, businesses and Governments to celebrate their achievements so far (a new solar panel, meat-free Mondays, grants to buy bikes) as a statement of response to this Emergency and to base any future plans on doing more of the same.

This was already an Emergency 40 years ago. The fossil fuel companies (and subsidiaries, dependent industries, investors and pollutocratic governments) knew it, but they chose to cover this up and continue to make profits from the most dangerous, genocidal and ecocidal process ever known.

What is there to do at this moment of extreme crisis but to prefigure or imagine a whole different way? This way would recognise our profound interbeing and interdependence with the rest of the community of life, as Daniel Christian Wahl says. To help with this we have to recover and invite telling of stories of people marginalised from Western narratives of progress, to think about life in a different light.

One thought on “Losing the Planet?”