This is the 50th anniversary of Earth Day. Having a single day to honour the Earth when every other day sees its ongoing destruction has been criticised, but it does mark the birth of the modern environmental movement, initially in America. It was started by Senator Gaylord Nelson, who in 1969 had seen the ravages of a big oil spill in California, and recruited young activist Denis Hayes to organise campus teach-ins where students and experts could teach the media about air and water pollution. Hayes quickly grew the organisation, protests by 20 million people unfolded across the United States, and a coalition of many separate protest groups was formed. Read more about the history here. For 2020, the Earth Day Network has announced new goals that will generate “a historic moment when citizens of the world rise up in a united call for the creativity, innovation, ambition, and bravery that we need to meet our climate crisis and seize the enormous opportunities of a zero-carbon future”.

Throughout Earth Day Week (already begun yesterday), there are online events you can take part in. See the public, free, no-fly conference from We Don’t Have Time.

On April 22 the Earth Day Network has Earth Day Live, a day of performances, talks and calls to action.

To focus in on the role of museums and culture:

Our friends at Culture Declares Emergency (including Letters to the Earth) are running a day of video screenings, of Letters of Love in a Time of Crisis.

Somerset House is running a day of talks and workshops online.

Museums For Future will be publishing its declaration statement.

Dezeen Virtual Design Festival will be dedicated to Earth Day, with a programme by Beatrice Galilee’s platform The World Around. The themes are Rethink, Reimagine, Recreate.

The Smithsonian Institute (which includes lots of major museums) has an Earth Optimism initiative, which is broadcasting a summit from 22-26 April.

The Nest Collective has Sam Lee Singing with Nightingales, and contributions from a wealth of musicians and ecologists.

The Pachamama Alliance has a Voices for the Earth summit.

We here at Climate Museum UK will be keeping on top of the activities, sharing the calls to action and new insights on our social media channels. Please follow us on @climatemuseumuk on Twitter, Instagram and Facebook. Also, check out all the ways you can take action by helping us in Climate Museum UK gather and promote lots of resources and creative ideas to protect the Earth.

It’s a fairly busy week for environmental launches, not totally related to Earth Day. For example, today April 21st is Fantastic Fungi Day. And Platform and BP or Not BP are marking 10 years since the BP Deepwater Horizon spill.

There’s also a wealth of other Earth Day events. See this array captured from Twitter: 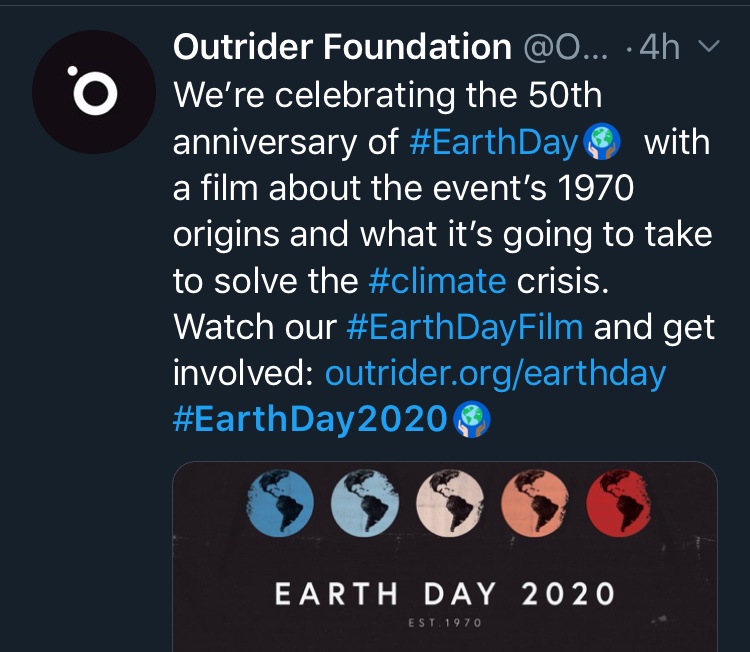