‘Sand Talk: How Indigenous Thinking Can Save The World’ by Tyson Yunkaporta

I started this book back in August but stopped and struggled to keep going due to all the scary and important things happening in the world and around me on a smaller scale. I could not force myself to read anything serious or important as I could not deal with everything at that point. As things settled a bit down (more used to lockdown restrictions and also stopped following the news) I again had the brain and focus capacity to read more complex and smart books so I picked up Sand Talk again and finished it within days. 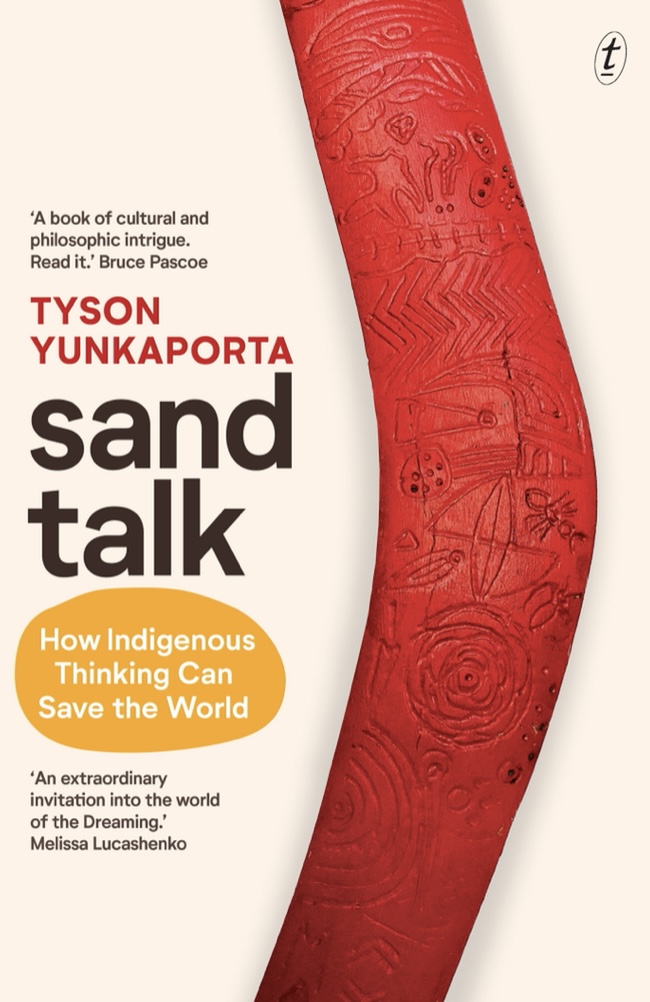 Sand Talk is about looking at global cultures and systems from Indigenous way of thinking that offers a “framework for the understandings needed in the co-creation of sustainable systems”. Tyson believes that Indigenous ways of thinking could make Western culture and society more sustainable for the long term. (After reading this, I fully believe it too.) He argues for dialogue and hybridisation between our ways of thinking, which could offer that said sustainability. I feel that the ideas he discusses are not so far-fetched from our values. However, these values have been overtaken by modernity and its effect on our culture and knowledge that has led to lack of relationships, time, respect and effort.

He starts the book with an introduction to himself (not because he wants to but because he feels it is necessary for his readers to understand his background). I really liked the openness and personal start of the book that gave me an understanding of what he will cover and how he approaches it. I also really appreciated his disclaimer that he is still learning, and what he writes is not the absolute truth, nor does he have the authority to speak on behalf of every other person from his tribe or his culture. He also points out at the beginning that he is translating Indigenous phrases and thoughts into English, a language that does not always have the words to describe ideas from different cultures. (I understand this as a person from Eastern Europe, Hungary, as there are words and expressions that I’m unable to translate to English). Tyson’s way of overcoming language and cultural barriers was to use drawn symbols that aid his story visually, cover part of his stories and also connect patterns that we might not realise otherwise.

Sand Talk is a book that is one of its kind. It is unique both because of its themes and topic and its structure. The book covers topics such as climate crisis, education, diet, relationships and society, history, gender and gender roles, economy, violence, racism, values… whilst also talking about smaller, more mundane topics and everyday stories. Tyson mixes big global issues with smaller more personal anecdotes as well as examples that are easily understandable by people from other cultures. He is including ‘yarning’, a way of knowledge- sharing that invites conversations, stories and dialogues into his book, which made the book a natural and easy read. It was fluid and interesting, and while discussing big issues, the stories and yarning gave a more relatable and personal way to understand issues discussed, which gave a little break from seriousness. I feel that the book managed to balance the seriousness of an educational book and the interesting elements of personal experiences and knowledge sharing. The book felt inviting through the personal stories of different people and certain examples Tyson used to make a point.

I think the only part of the book I was unsure about was a chapter focusing on gender, gender roles and violence. While I understand his point and after reading it maybe even agree with it, it did not feel comfortable to read the statistics of domestic violence or public violence.

After reading this book, I feel that Tyson is a great teacher, who teaches as much as learns from others and who lives by the values he shared with us. He acknowledged his sources throughout the book from other members of his tribe and Elders, to philosophers and great historical thinkers. I especially enjoyed the bibliography included in his acknowledgement section. (It made me laugh.) This book felt accessible, written for anyone who picks it up – both academics and general public, to non-Indigenous people as well as to Indigenous people. It shares knowledge and ways of thinking that can be eye opening and important to any of us.

While I started reading this book due to its connectedness to the climate crisis and ideas on how to stop it, this book offered way more. Tyson examines long term patterns by looking at the history of civilisations and modern societies and comparing their thought systems to Indigenous ways of living and knowing. His depth of focus on history and present ideas and societies raises questions of why we do not learn about history in a long term and pattern-focused way that could actually give us all tools to navigate life in a more sustainable way. I believe that his argument and comparisons between thought and cultural systems are the biggest strength of Sand Talk. It shows things that we can change and could achieve. He did not preach or push that his culture is better, but shared knowledge in order to offer a way of thinking that could help in the long term. It often felt personal what he was pointing out (flaws in our society, lack of focus or listening, individuality etc.). However, I agreed with what he was arguing, which is to be more attentive, listen, talk with respect, argue and discuss rather than believing we know it all. We need to be able to learn from each other and change when it’s needed.

It was a great read that I would recommend to anyone. (I also will buy this book for some friends for Christmas, as I’m sure they’ll love it.)