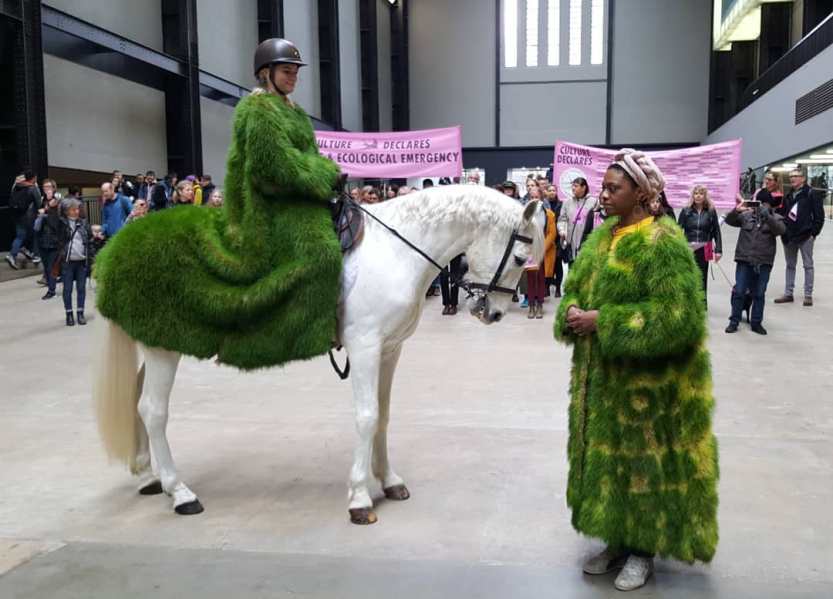 We, the team behind Climate Museum UK, declare a Climate and Ecological Emergency.

This is part of the movement Culture Declares Emergency.

We pledge to support the communities and civic & cultural organisations we work with in tackling this Emergency, and we call on others to explore how they might extend support in similar ways.

These are our intentions:

1. We will continually explore and call for the Truth

Governments, and their public broadcasters and cultural agencies, must aim to tell the truth about the Climate and Ecological Emergency, reverse inconsistent policies and communicate the urgency for far-reaching systemic change.

We will signpost and draw on the most evidenced and current information about climate, the state of the living planet, and what has caused damaging impacts.

We will support the people we work with to discover the truth about the Emergency and the changes that are needed.

We will encourage people to hold their governments, media and institutions such as schools and museums responsible to respect and communicate the best evidence they can source.

2. We will take Action

Governments must enact legally binding policy measures to reduce emissions to net zero by 2025 and to reduce consumption levels.

We pledge to work towards reducing our emissions to net zero by 2025, by using only recycled or no-impact materials, by using 100% renewable energy, and by offsetting any unavoidable non-renewable consumption by supporting regenerative rewilding projects.

We will challenge policies and actions of local and national governments and publicly funded agencies, where we interact with them, that do not help to reduce emissions or consumption levels.

We will actively work to imagine and model ways that our organisation and wider society can regenerate the planet’s resources.

3. We are committed to Justice

The emergency has arisen from deeply systemic injustices. Arts and Culture can imagine and forge shifts in the ways we relate to one another and the world, in our values and behaviours.

We will do what is possible to enable dialogue and expression amidst our communities about how the Emergency will affect them and the changes that are needed.

We will support demands for more democracy within our civic institutions and government.

We believe that all truth-telling, action and democratic work must be underpinned by a commitment to justice based on intersectional principles, led by and for marginalised people.

Why have we made this decision?

In October 2018, the International Panel on Climate Change announced that there are only 12 years to make urgent and unprecedented changes. The way things stand now, we have only 1% chance of doing this, and only a 5% chance global average temperatures can be limited to less than 2 °Celsius warmer than pre-industrial levels. The warnings of climate and ecological breakdown are all around:

There has been a gradual destabilisation of the climate due to the extraction and burning of fossil fuels, and in the last few decades this has accelerated. Droughts are getting longer and more severe, causing more scarcity of food and water. Extreme weather events are becoming more intense and destructive. Heatwaves are already magnifying the fire risk around the world and causing heat stress deaths. Widespread floods are escalating. Rising sea levels are threatening coastal and riverside settlements. Global temperatures have increased by 1 degree Celsius from pre-industrial levels. Atmospheric CO2 levels are above 400 parts per million (ppm), which far exceeds the pre-industrial base level of 280ppm.

In the past year, there are more signs that tipping points are being reached. In December it was reported that the rate of Greenland’s ice melt has quadrupled. Soon after, NASA discovered a huge cavern has opened up under Antarctica, and that a polar vortex destabilised sending freezing Arctic weather over the American mid-west whilst January was the warmest month in Australia, ever. In March, the UN reported that sharp temperature rises in the Arctic are inevitable, even if the Paris goals are met.

The Emergency includes rapidly rising inequality within and between nations, the deterioration of democracy and human rights, and conflicts over resources. This builds on centuries of historic injustices through racist colonial exploitation and annihilation of People of Colour and indigenous communities, appropriation of lands and extraction of natural resources. The world’s poorest 58% are responsible for only 14.5% of global CO2 emissions. The crisis – resulting from industrial practices and overconsumption by the richest – is worsening injustices faced by people in the Global South, indigenous land defenders in particular. Over time it will intensify inequalities experienced in every country.

There is also a generational justice issue. If we want people who are under the age of 20 to live a full life, we must stop burning fossil fuels now.

Although it is difficult to estimate, or to project future rates of loss as the Emergency worsens, already three species are lost to eternity each hour. In February, there were reports of a catastrophic decline in insect populations which will soon affect our food supplies. The Food and Agriculture Organisation has reported that 63% of plants, 11% of birds, and 5% of fish and fungi are in decline. There is a debilitating loss of soil biodiversity, forests, grasslands, coral reefs, mangroves, seagrass beds and genetic diversity in crop and livestock species. Dead zones are growing in the oceans due to acidification and warming.

The main causes of ecological breakdown are: intensive agriculture with its use of chemicals; deforestation for logging, biofuels and livestock rearing; growing urbanisation and transport infrastructure; over-exploitation of water; over-harvesting and wildlife poaching; invasive species and diseases; pollution; and the burning of fossil fuels and climate change.

What can we do?

A major cause of injustice today is the suppression of truth by industrial and fossil fuel lobbyists – based in the Global North – so that they can continue to profit from exploiting people and plundering nature. The situation is much worse than we are told by those in power and in the media. The alarming reality needs to be named and discussed on media channels and in all cultural or civic forums. Equally vital is that solutions are clearly laid out. If speedy and drastic action is taken, if solutions within our reach are applied, governments can meet their climate goals.

The deliberate silencing of truths about the planetary emergency must end. The need to take action on climate is more urgent and more immediate than ever. The measures currently being taken are wholly inadequate to meet the current level of threat, as the destabilisation of global climate has progressed much more quickly than predicted. Failure to act is a failure of responsibility and an incredible arrogance in the face of the science.

Tackling the Climate and Ecological Emergency, its systemic causes and its unjust impacts should be the overriding priority of every politician, and to which all available resources should be immediately directed. Until they do, anyone who is able to must call for this, to communicate that sense of Emergency to others, to advocate for those unable to participate fully in civic life, and to push for the action that it demands.